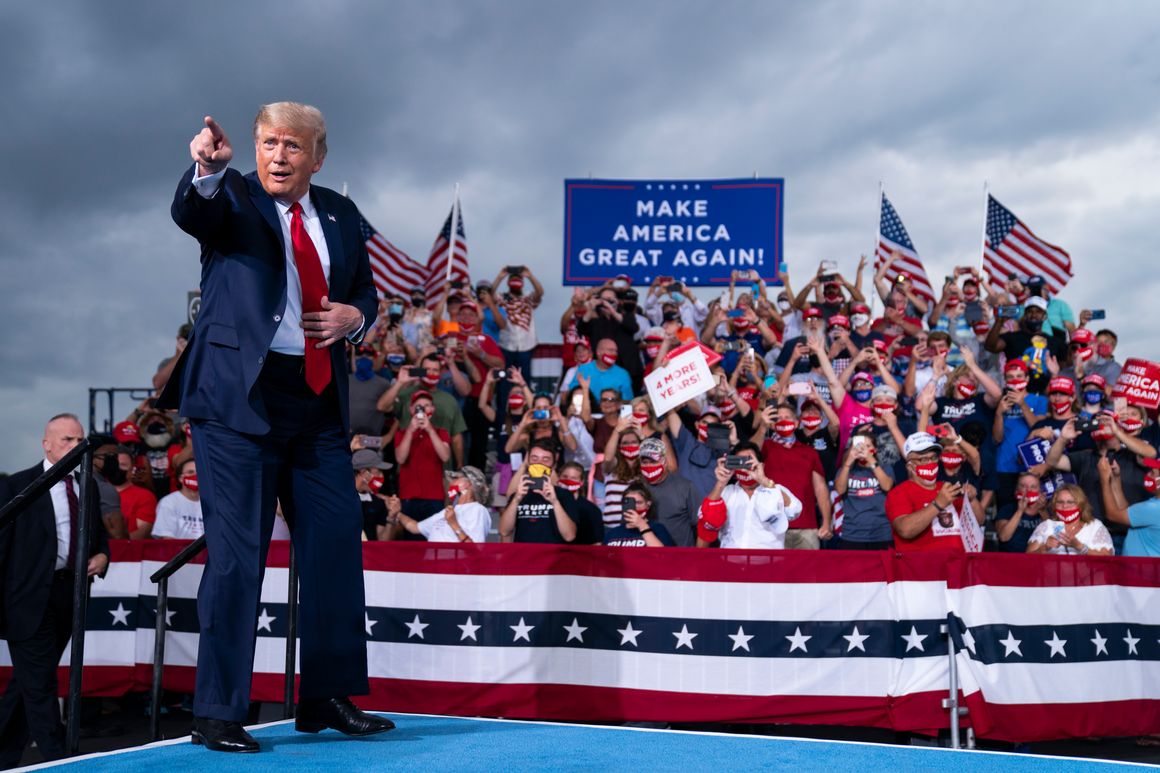 We are at a stage of the race, however, when reporters should feel confident unloading their notebook and sharing their hunches and strongly held suspicions. Having spent the past year working to reconcile two spheres of reporting—on the ground with voters, and inside the campaigns with party officials—I’m comfortable that enough dots have been connected to offer my fundamental impressions about this race.

What follows are not ironclad assertions of realities to come; with Trump fighting Covid-19, the economy slowly unraveling and the political climate growing more volatile by the minute, there is no telling what might yet happen to upend the race. Rather, what I’m sharing today are, to borrow from the great NFL writer Peter King, four things I think I think about the 2020 election.

1. Trump fatigue is peaking at the wrong time for Trump.

Naturally, there was some chatter over the weekend that the president’s Covid-19 diagnosis might engender sympathy for him, humanizing a man who strains to conceal his vulnerabilities and project machismo to the masses. That dynamic could very well be in play. But from what I’ve seen, it will be washed out—if not overtaken—by an alternative reaction to the spectacle unfolding around Trump’s illness: fatigue.

It’s impossible to quantify how tired Americans are of this presidency. But it’s a constant theme in the conversations I have with voters, including die-hard Trump supporters. They feel trapped inside a reality TV show and are powerless to change the channel. They want a break, even if they don’t want a new program.

This exhaustion has ebbed and flowed during the Trump era. It’s no coincidence that his lowest approval ratings have correlated with incidents of saturation news coverage, such as the Charlottesville protests and the release of the Mueller report. The president’s advisers have long believed that people are most likely to view him favorably when they’re not seeing or hearing him; that his absence from their everyday lives, in effect, makes voters’ hearts grow fonder.

Unfortunately for them, the past few days have featured the highest drama of the past four years. Even when stricken with a lethal disease, Trump could not abide disappearing from the headlines; this is the gift he cannot bring himself to give. It’s not that voters will punish the president for becoming infected; it’s that voters, weary of their social media feeds and kitchen table conversations being dominated by Trump, may resent that he turned a sympathetic situation into yet another showcase of administrative incompetence and self-celebrating bravado.

Which leads me to…

2. The “silent majority” in this election is not who you think it is.

People who love the president are vocal about it. People who hate the president are vocal about it. The polarization on display this election cycle is the most palpable, the most visible, of our lifetimes. People wave flags from their porches and wear shirts to the grocery store and turn out by thousands to rallies and marches. I don’t believe there is a “silent majority”—that is, a group whose views are kept quiet—for either Trump or Biden.

I do believe, however, there is a silent majority against Trump. In my travels, this group could be considered “the kid curmudgeons.” They are younger Gen Xers and older millennials: college-educated folks ages roughly 28 to 42, who are not ideological, who are not partisan, who consume little political news, who rarely if ever vote, but who might flood the polls this fall simply because Donald Trump annoys them.

Is that overly simplistic? Perhaps. But I’ve been stunned at how many people I’ve encountered who fit this description. They’re establishing careers, starting families, buying first homes—building a life—and don’t really have the time or inclination to get engaged politically. They don’t know a ton about either party’s policy platform or legislative record. What they do know is Trump irritates them to no end. He reminds them of the lightweight underclassmen at a college kegger; his raucousness was entertaining at first, but the act has worn awfully thin. They just want to get rid of him and get on with the party.

3. Democrats will regret placing so much emphasis on absentee voting.

Thanks to new voting laws in numerous states—laws that permit more voters to request and cast absentee ballots—we always expected that in-person voting rates on Election Day would plunge to record lows. That was before Covid-19.

Now, the combination of the pandemic and the looser regulations all but guarantees a surge of absentee voting unlike anything we’ve ever witnessed. And that’s fine: Despite what the president says, there is no evidence of absentee ballots being especially susceptible to fraud or manipulation. What are absentee ballots especially susceptible to? Disqualification. Every election cycle, many thousands of absentee ballots are rejected because they fail to meet certain criteria: They are not signed, or properly sealed, or they arrive too late. (This year alone, a neck-snapping 550,000 ballots were disqualified during the presidential primaries, according to an analysis by NPR.) Because Democrats are far likelier to vote absentee than are Republicans, the problem is uniquely daunting for Biden. In Pennsylvania alone, there are estimates that a new law requiring mail ballots be placed inside of two envelopes—a privacy envelope containing the ballot, tucked inside an outer envelope—could result in the disqualification of 100,000 votes. Remember: Trump’s margin of victory in Pennsylvania in 2016 was roughly 44,000 votes.

Democrats had good reason to promote absentee voting during the early stages of the Covid-19 crisis. But with much of society now resuming daily routines in a socially distant manner, and with Dr. Anthony Fauci declaring that in-person voting is safe, it seems Democrats have exposed themselves to unnecessary political risk with the push for absentee voting. Not only are these ballots at risk for disqualification; they will clog up the counting processes in states like Michigan, Wisconsin and Pennsylvania, where absentee votes can’t be opened until Election Day. It obviously isn’t the Democratic Party’s fault that Trump is threatening to reject the results of the 2020 election. Nevertheless, knowing that a sound victory on Election Night is the surest way to prevent any shenanigans from the sitting president—and knowing that a protracted count over several weeks could easily fuel conspiracy theories and possibly even spark civil unrest—it would behoove Democratic leaders to urge their constituents to vote in-person if at all possible.

Stop me if you’ve heard this before: The president has a problem with female voters. Yes, this has been observed by every pollster, every political professional, in both parties over the past four years. Trump has been briefed on it—time and again—by his team, who warned him that the 2018 Democratic wave could repeat itself without a course correction. But what we’re seeing now, in polling conducted by both parties, isn’t a wave. It isn’t even a tsunami. It’s something we don’t have a name for, because we’ve never seen anything like it. The president’s standing with women voters of every race, every educational background, every socioeconomic stratum, has fallen off. But when it comes to the white, college-educated women who made up a sizable chunk of Trump’s base—he won 44 percent of them against Hillary Clinton—his numbers have collapsed entirely.

The president, seeing ominous signs of this earlier in the year, sought to scare these voters back into his camp, warning of an assault on the suburbs and violence visiting their families and communities. But this tactic appears to have backfired. Recent internal polling from Republicans and Democrats alike suggests that Trump’s law-and-order messaging alienated far more women than it attracted.

This isn’t just a problem for Trump in purple states. Last week, I heard from one of the smartest Republicans alive, a longtime party operator who lives in a state Trump carried by double digits. He told me the polling he was seeing there was something out of a nightmare; these were numbers he never expected to see in his lifetime. The only thing more dizzying than that? I had another conversation, with another dependable red-state Republican, the very next day, and heard the very same thing. Both of these men were sounding the alarm, alerting me that Trump could actually lose their states, and would at the very least drag down a number of down-ballot Republicans, because women have turned on the GOP at a historic clip. Trump lost women by 13 points to Clinton, according to exit polls, and Republicans have long worried that the figure could climb into the high teens. There is now genuine worry that the margin could explode north of 20 points—the biggest gender gap in modern election history.

Previous PostLondon victory good test for Brent Lakatos, who plans to race Paralympic marathon Next PostU.S.-Canada trade tensions: How Biden would, and wouldn't, differ from Trump

Venture capital gets less diverse in 2020