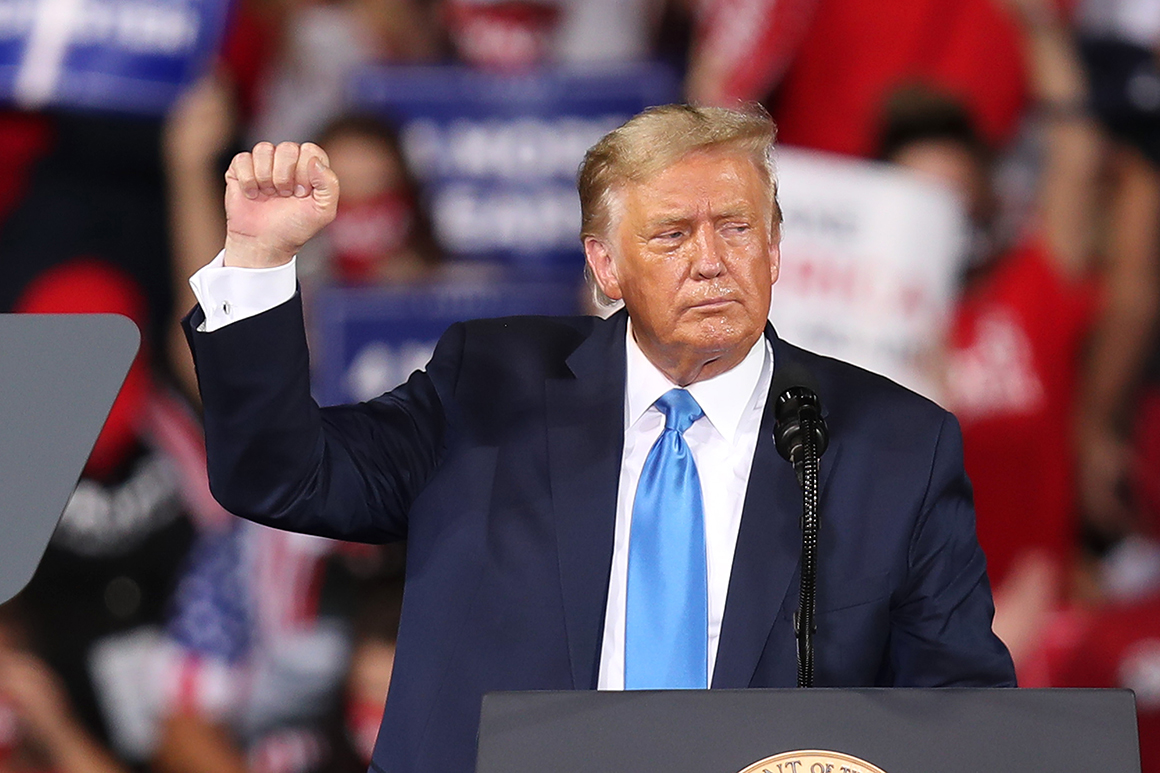 Coming just five weeks before Election Day, Barrett’s nomination will ignite the enthusiasm of voters on both the left and right. In less than 48 hours after Ginsburg’s death, the liberal group ActBlue raised roughly $100 million dollars for Democratic candidates, while conservative groups — concerned with deregulation, social issues and abortion rights — prepared millions of dollars in ad buys for a contentious confirmation battle.

“We are all in for a seven-figure effort along the kind of lines we did with Kavanaugh and Gorsuch,” said Tim Phillips, president of Americans for Prosperity, a Koch-backed group concerned with economic and fiscal issues, referencing Trump’s other Supreme Court pick, Justice Neil Gorsuch. “This is a huge moment for the country.”

For Trump himself, aides hope Barrett will help strengthen his bond with evangelicals and Catholics; support among these groups had slipped during 2020. Trump cannot afford to alienate or lose any parts of his base during a tight election year in which polls show Democratic nominee Joe Biden slightly ahead in battleground states like Pennsylvania, Michigan and Wisconsin.

Following Trump’s announcement, the confirmation process will move to the Senate. The Senate Judiciary Committee is expected to hold a confirmation hearing the week of Oct. 12. A Supreme Court confirmation hearing typically lasts three to four days. Then, Senate Republicans are aiming to confirm the nominee before the election, although Democrats are doing everything they can to delay the process with procedural moves.

“What I saw at her 2017 confirmation hearing, and what I saw day in and day out when I clerked for her, is she’s got incredible fortitude and poise,” said John Adams, a former judicial law clerk for Barrett and attorney at Eimer Stahl LLP. “She will handle this process very well.”

An ABC/Washington Post poll released Friday showed the majority of Americans believe the Senate should not confirm a new justice until after the election, when the winner of the presidential race is clear. Only 38 percent of Americans surveyed said the confirmation should happen before Nov. 3.

But Republicans have opted to seize on a rare opportunity to seat another conservative jurist who could serve for decades — even if it means potentially suffering through political backlash or losing their thin Senate majority.

In 2016, President Barack Obama similarly tried to fill a Supreme Court vacancy during an election year only to be rebuffed by McConnell, who controlled the Senate majority and argued a new justice should only receive a vote after the presidential election.

That year, Obama officially nominated Merrick Garland, the chief judge of the U.S. Court of Appeals for the D.C. Circuit, in mid-March. Many Republicans refused to even meet with him in person. McConnell held the seat open for months until he and Trump could confirm Gorsuch, causing many liberals to feel like the seat had been stolen.

For liberals, it was a reminder of the high political value of a Supreme Court seat — something Republicans zeroed in on decades ago after the Senate in 1987 declined to confirm Robert Bork, one of President Ronald Reagan’s judicial picks.

Now, McConnell and other key Republicans, including Senate Judiciary Chair Lindsey Graham, say the argument for waiting for the election results no longer applies because the same party controls both the Senate and White House.

Sign up today to receive the #1-rated newsletter in politics

The intense focus on the Supreme Court confirmation helps Trump in many ways, even if it lets Democrats cast Republicans as hypocrites for going back on their previous arguments and rushing an election-year confirmation process. To start, the unexpected battle will divert voters’ attention away from more negative headlines about issues potentially damaging to Trump, like the ongoing pandemic or his refusal to commit to a peaceful transfer of power. Democrats have tried to play up the idea that a conservative court will dismantle Obamacare for millions of Americans during a once-in-a-century pandemic.

Trump had been looking for weeks for a message to supplant the terrible headlines about this administration’s handling of Covid-19, which has killed over 200,000 Americans. A confirmation battle and all of the controversy it generates fulfills that need and gives the White House another topic to focus on at fundraisers, campaign rallies and even the upcoming debate on Tuesday, Sept. 29.

Some judicial experts, like Tobias, argue there is not enough time this fall to confirm a judge who will serve on the highest court for decades.

“You can’t do it right in 30 days,” Tobias said. “I don’t think hearings could be any shorter than four or five days. By rushing it, you risk not having the public buy-in on the process.”

Marianne LeVine and Gabby Orr contributed to this report.