The investigation into a gruesome attack by a Tunisian man who killed three people in a French church had a second suspect in custody Friday, as France heightened its security alert amid religious and geopolitical tensions around cartoons mocking the Muslim prophet.

Muslims held more anti-France protests across the Mideast and beyond on Friday, while mourners placed flowers, messages and candles at the entrance to the Notre Dame Basilica in the French Riviera city of Nice, where Thursday’s knife attack took place.

The attacker, Ibrahim Issaoui, was seriously wounded by police and hospitalized in life-threatening condition, authorities said. Anti-terrorism prosecutors in France and Tunisia are investigating.

The new suspect is a 47-year-old man believed to have been in contact with the attacker the night before the attack, according to a judicial official. The official was not authorized to be publicly named.

The victims included 55-year-old Vincent Loques, a father of two who was the church’s sacristan, in charge of its holy objects, according to local broadcaster France-Bleu. Another was a 44-year-old mother of three from Brazil named Simone who had studied cooking in Nice and helped poor communities, France-Bleu reported.

In an interview broadcast Friday with Saudi-owned Al-Arabiya TV, the attacker’s mother said she was shocked by the events.

From the Tunisian province of Sfax, the mother, her eyes wet with tears, said she was surprised to hear her son was in France when he called upon his arrival and had no idea what he was planning.

“You don’t know the French language, you don’t know anyone there, you’re going to live alone there, why, why did you go there?” she said she told him over the phone at the time.

His brother told Al-Arabiya that Issaoui had informed the family he would sleep in front of the church, and sent them a photograph showing him at the cathedral where the attack took place.

“He didn’t tell me anything,” he said. A neighbour said he knew the assailant when he was a mechanic and held various other odd jobs, and had shown no signs of radicalization.

France’s anti-terrorism prosecutor said the suspect is a Tunisian born in 1999 who reached the Italian island of Lampedusa, a key landing point for migrants crossing in boats from North Africa, on Sept. 20 and travelled to Bari, a port city in southern Italy, on Oct. 9. It is not clear when he arrived in Nice.

Tunisian anti-terrorism authorities opened an investigation Friday into an online claim of responsibility by a person who said the attack was staged by a previously unknown Tunisian extremist group.

Was ordered to leave Italy 3 weeks ago

Tunisians fleeing a virus-battered economy make up the largest contingent of migrants landing in Italy this year. Italian media reported that from Lampedusa, where Issaoui was one of 1,300 arriving migrants on Sept. 20, he was placed with 800 others on a virus quarantine boat in Puglia.

After the two-week quarantine, he received a notice that he was being expelled from Italy for illegal entry and was given seven days to leave the country, according to Milan daily Corriere della Sera.

Italy’s interior minister confirmed Friday that the suspect was ordered to leave Italy on Oct. 9. Minister Luciana Lamorgese did not give further details on what, if any action, was taken to ensure the man complied with the order, but she said he was not flagged by either Tunisian authorities nor by intelligence agencies.

Lamorgese called Thursday’s attack in France “an attack on Europe. Let’s not forget that Lampedusa, Italy, is the gateway to Europe.”

The attack was the third in less than two months that French authorities have attributed to Muslim extremists, including the beheading of a teacher who had shown caricatures of the Prophet Muhammad in class after the images were republished by satirical newspaper Charlie Hebdo.

The images deeply offended many Muslims, and protesters burned French flags, stomped on portraits of President Emmanuel Macron or called for boycotts of French products at demonstrations Friday in Pakistan, India and Afghanistan. 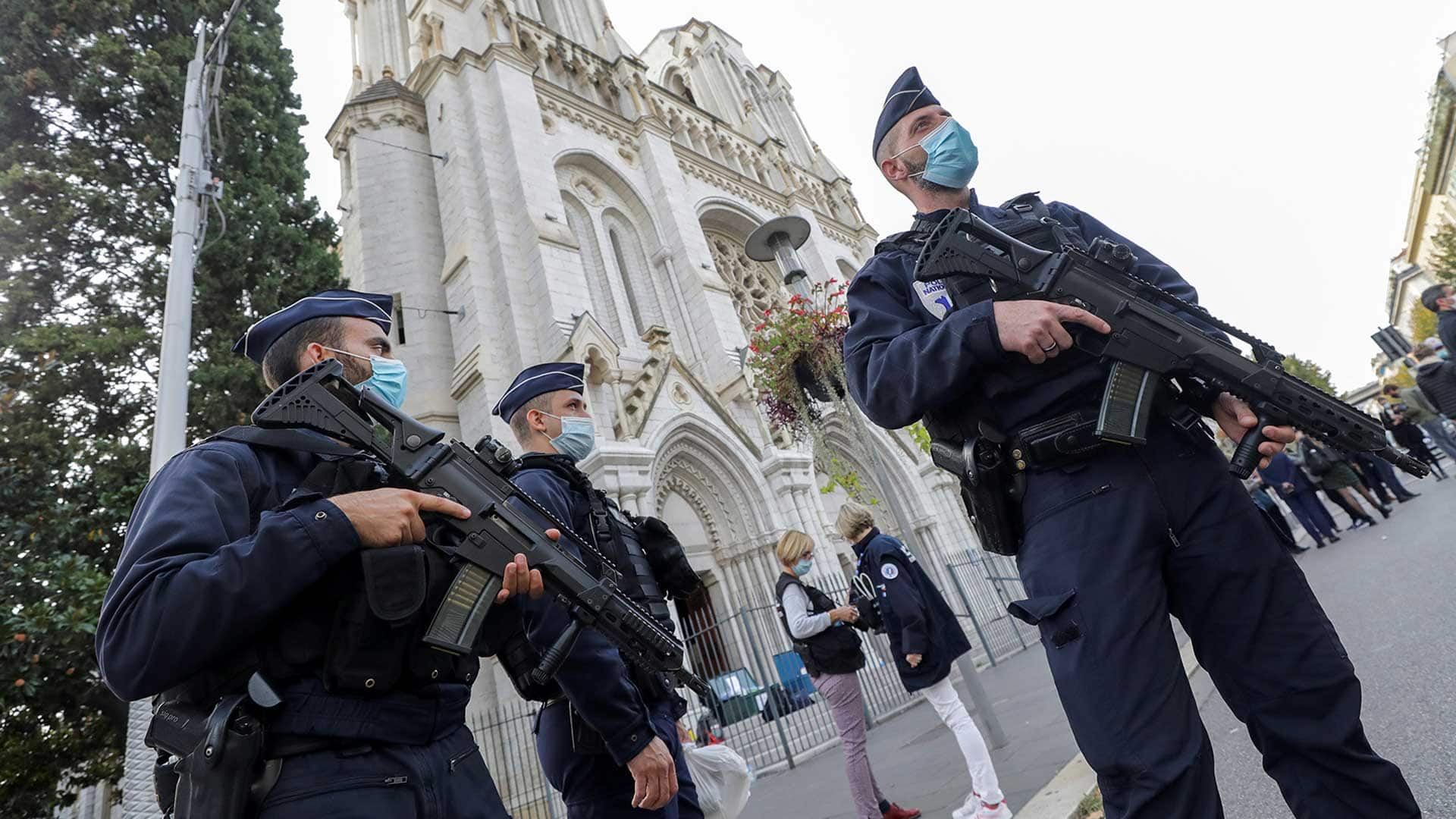 Thousands of extra soldiers have been deployed throughout France, and the country’s national security alert is at its highest level, after a knife-wielding man killed three people at a church in Nice. 2:28

Macron said he would immediately increase the number of soldiers deployed to protect French schools and religious sites from around 3,000 to 7,000. Schools remain open during a nationwide lockdown that started Friday to stem the spread of the virus, but religious services are cancelled.

France’s interior minister said Friday that the country is “at war” with Islamist extremists, and the conservative lawmaker for the Nice region, Eric Ciotti, called for a “French-style Guantanamo” to lock up terrorist suspects.