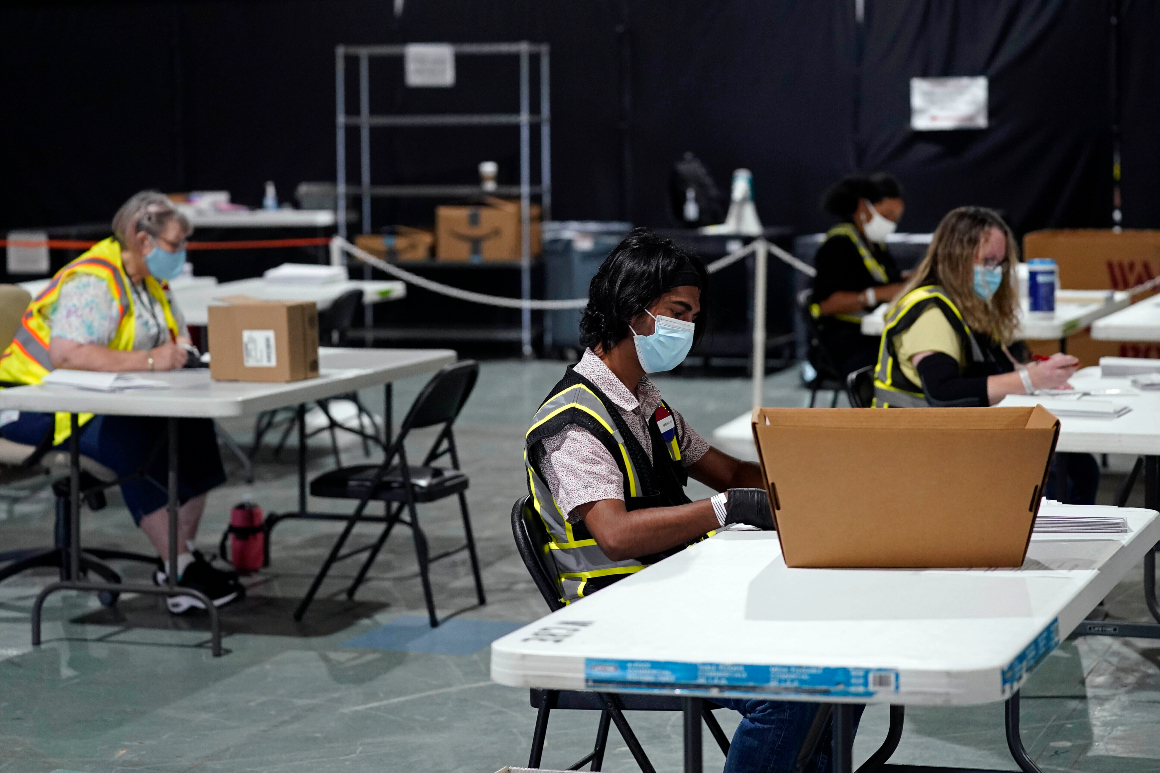 With scores of court challenges underway across the country seeking or opposing coronavirus-related changes to voting procedures, the change in the ideological balance of the high court could affect the outcome of such fights — even if a new justice doesn’t take the bench until after the election.

President Donald Trump signaled Saturday night that he expects federal judges to play a key role in achieving a definitive result within hours of the polls closing on Election Day.

“We’re going to have a victory on November 3rd the likes of which you’ve never seen,” Trump told a rally in Fayetteville, N.C. “Now, we’re counting on the federal court system to make it so that we can actually have an evening where we know who wins. Not where the votes are going to be counted a week later or two weeks later.”

It wasn’t entirely clear whether Trump was urging or anticipating a more prominent role for the courts in election issues in the wake of Ginsburg’s death. He has been immersed in discussions about the judiciary recently as he released a list of possible Supreme Court nominees last week and after the liberal icon passed away Friday evening.

But for months now, lawyers connected with the two parties have waged a running legal duel over everything from vote-by-mail expansion to ballot collection rules to postal service cutbacks, all carrying the potential of major implications for election outcomes.

By various counts, there have been between about 170 and 250 election-related court challenges filed or litigated in 45 states during the current cycle. Some experts say the numbers are on a record pace, although there seem to have been few efforts to produce a comprehensive tally in past years. Dozens of the current suits could wind up producing emergency applications to the justices, requiring them to weigh in on whether lower court orders go too far or not far enough.

The Trump campaign has filed suits against vote-by-mail changes in Pennsylvania, Nevada, New Jersey and Montana, while Democrats or other groups have gone to court to try to broaden access to voting in Texas and Tennessee. There’s also been a major showdown in Florida over voting by ex-felons in the state and even litigation over whether absentee ballots should include free postage.

At the request of the losing side, any or all of these cases could wind up at the Supreme Court for resolution.

Gauging the immediate impact of Ginsburg’s absence on the outcome is hard, election lawyers said, but the vacancy might give more traction to Republicans and undercut Democrats in the voting-related battles by making it harder for the liberal wing to form a majority with other justices.

“One of the things that will be included in the calculus of whether people go to court is: What is going to happen if it gets to the Supreme Court?” said Myrna Perez of the Brennan Center for Justice. “Her passing is likely to deter some people who felt like they need her moral vision — her clarity to persuade other justices and it is likely going to inspire other people who are glad she’s not there to offer that same vision and clarity.”

Even if Democratic efforts to get courts to force broader voting access don’t get much traction at the high court, there is still the question of more unusual legal efforts Republicans and the Trump campaign itself are mounting this year to challenge vote-by-mail provisions, as well as ballot-collection boxes and new steps to lift bans on organizations and individuals collecting absentee ballots.

“This was already a very conservative court,” said University of Minnesota Law School Dean Dan Tokaji, an election law specialist. “When it comes to a reluctance to protect voters from alleged infringement of their rights, that’s not going to change, but we’re seeing other cases where the conservatives are really the ones seeking judicial intervention, that’s the question. Will the court be more receptive to those claims?”

Tokaji said it’s unclear, but he’s doubtful the court will find a majority to step in in those cases. “I’m not sure the court will go that far. … If it looks like the court is bending over backwards to help Trump win, in the end, that is not a good look for them,” the law dean said.

Any immediate shift isn’t expected to be dramatic, but in a closely contested election, every ruling has the potential to be pivotal.

Court-watchers say predicting what a court without Ginsburg will do requires — to some degree —assessing what Roberts is or was likely to do, since he has been viewed as the GOP appointee most likely to join with liberals since Justice Anthony Kennedy retired in 2018.

In cases on the court’s regular, argued docket, Roberts has been no friend of voting-rights advocates. He was the architect and author of the Shelby County decision in 2013 which, on a 5-4 vote, knocked out a key provision of the Voting Rights Act that required many states and localities to get “pre-clearance” from the Justice Department or a court before changing voting procedures or districts.

But his stance on emergency applications reaching the court in the weeks leading up to an election seems to have been less ideological.

Just last month, Roberts appeared to side with the court’s four liberals and Justice Brett Kavanaugh in refusing a Republican Party request to block a plan in Rhode Island to keep waiving certain security measures for absentee ballots due to the pandemic. Since the court doesn’t release vote tallies on such matters, it can’t be said for certain how the chief justice voted, but the three other GOP-appointed justices publicly dissented and Roberts did not join them.

A similar scenario played out in 2014, when Roberts appeared to join with the court’s liberals and Kennedy as the court blocked a GOP-backed voter ID law from taking effect in Wisconsin shortly before the election. Again, the court’s three other Republican-appointed justices dissented. And, again, Roberts kept mum.

However, in April of this year, Roberts sided with the court’s conservative bloc in a 5-4 decision that overturned a Covid-19-related federal court order that would have allowed Wisconsin voters to return ballots after Election Day. Liberals cried foul, accusing their colleagues of ignoring the severity of the pandemic.

In a rare, defensive and unsigned explanation accompanying the emergency order, the GOP-appointed justices insisted they were only upholding the principle that federal judges shouldn’t monkey with election procedures in the lead-up to a vote.

“The Court’s decision on the narrow question before the Court should not be viewed as expressing an opinion on the broader question of whether to hold the election, or whether other reforms or modifications in election procedures in light of Covid-19 are appropriate. That point cannot be stressed enough,” the opinion said.

Lawyers looking for tea leaves on how Roberts might vote in future virus-related election cases have also noted that he has strayed from his GOP-appointed colleagues in a series of emergency matters the court has handled challenging state lockdown orders aimed at controlling the virus. That has angered his fellow conservatives on and off the court.

Now, Roberts’ views on such matters will be less decisive and the chances of a 4-4 deadlock on the court will rise.

The increased possibility of tie votes at the Supreme Court advantages Republicans because of the huge strides Trump has made at installing his nominees on federal appeals courts around the country. If the Supreme Court deadlocks on an emergency application, the lower court’s ruling stands.

“The decisions of the appeals courts in these cases now have a greater chance of being final,” said Jason Torchinsky, a lawyer who represents Republicans in election law cases.

“All of a sudden the circuit courts become very important battlegrounds because they decide the issues that are not decided in the event of a deadlock at the Supreme Court,” said Jan Baran, a Republican campaign finance lawyer.

A quick survey of some of the federal appeals courts with jurisdiction over swing states shows a profound ideological lean toward GOP nominees.

The most ideologically lopsided federal appeals court is the St. Louis-based 8th Circuit, which has jurisdiction over Minnesota. That court has 10 Republican appointees and only one nominated by a Democrat. However, Minnesota may be outside Trump’s reach, with polls showing Biden an average of about 10 percentage points ahead there.

The next-most-skewed appeals court is the Chicago-based 7th Circuit, split 9-2 in favor of Republicans. It hears cases from Wisconsin, which could be a critical swing state.

The Atlanta-based 11th Circuit, which oversees Florida, and the Philadelphia based 3rd Circuit, with jurisdiction over Pennsylvania, have both swung to narrow GOP-appointee majorities under Trump.

Of course, judges don’t always vote in alignment with their partisan background or the presidents who appointed them. The fact that appeals and emergency motions are typically decided by three-judge panels, and not the full court, also adds a degree of uncertainty to the process. In many circuits, the broader court can intervene in a case, but they rarely do.

Election law watchers and politicians are also warily eyeing another possibility: a postelection standoff at the Supreme Court if the result of the November vote is murky or disputed. Indeed, some prominent Republicans pressing for quick confirmation of a successor to Ginsburg are gravely warning of the possibility of chaos if the election is close and the Supreme Court is shorthanded.

“We cannot have Election Day come and go with a 4-4 court,” Sen. Ted Cruz of Texas said during an interview with Fox News’ Sean Hannity Friday night. “A 4-4 court that is equally divided cannot decide anything. And I think we risk a constitutional crisis if we do not have a nine-justice Supreme Court, particularly when there is such a risk of a contested election.”

Many election law experts said they believe Roberts, who has expressed a desire to preserve the court’s legitimacy, would try to avert such a tie vote at all costs.

“It would all be very awkward,” Baran said. “That’s a dynamic here that can’t be ignored. It does increase the attention and put the pressure on Chief Justice Roberts. … I think a lot of people who are familiar with the potentials for all this are hoping there will be a decisive win, one way or another, so we can avoid a lot of this circus.”

Venture capital gets less diverse in 2020