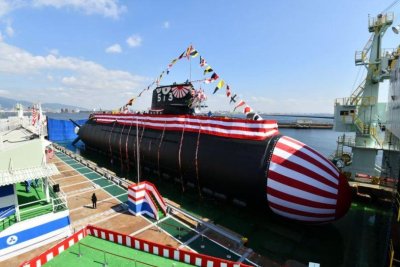 The diesel-electric-powered vessel is equipped with lithium-ion batteries, currently used only by Japanese submarines, for longer underwater travel.

At 275 feet in length and weighing 3,000 tons, Taigei, a name that means Big Whale in Japanese, was built and launched at the Mitsubishi Heavy Industries shipyard in Kobe at a cost of $720 million.

The vessel, which will carry a crew of 70 and was designed for stealth capability, is scheduled for service in March 2022.

The Taigei will be the Japan Maritime Self-Defense Force’s 22nd submarine, meeting the government’s goal, under its 2010 National Defense Program Guidelines, to increase its submarine fleet from 16 to 22. It comes as China has increased its military actions in waters near Japan, including Japan-administered islands in the East China Sea claimed by China.

A MSDF statement on Wednesday said that the new submarine “is the first of its class submarine that improve detection ability and suitable environment for female submariners.”