The ‘Want to Want Me’ hitmaker is giving a superhero twist to the viral challenge days after he appeared to chip his teeth when attempting to eat corn on the cob attached to a drill.

AceShowbiz –
Jason Derulo has transformed himself into a superhero for the latest TikTok viral trend. On Saturday, May 23, the “Want to Want Me” hitmaker took part in the “Wipe It Down” challenge as he shared his impressive version wherein he got to be Spider-Man, but fans ended up being distracted by the tight suit he was wearing.

In his 30-second video, the 30-year-old singer appears shirtless when he begins to wipe down a full body mirror in his restroom. The scene then cuts to a spider biting into his hand. After shaking off the eight-legged creature, he goes back to cleaning the mirror, but is quickly transformed into Spider-Man.

Donning a skintight red and blue costume, the ex-boyfriend of Jordin Sparks shoots webs out of his palms before breaking into a celebratory dance. At the end, he flies vertically out of frame after shooting a web into the air. In the caption of the clip, he simply wrote, “With great power comes great responsibility.”

While his TikTok video gained nearly 3 million views since its release, many of his fans could not help but admit to have been distracted when he shared it on Instagram. “All I see is [eggplant emoji] #noshameinmygame,” one noted. Similarly, another one wrote, “all I see is the magic stick.” A third pointed out, “U accidentally left a banana in ur pants.” 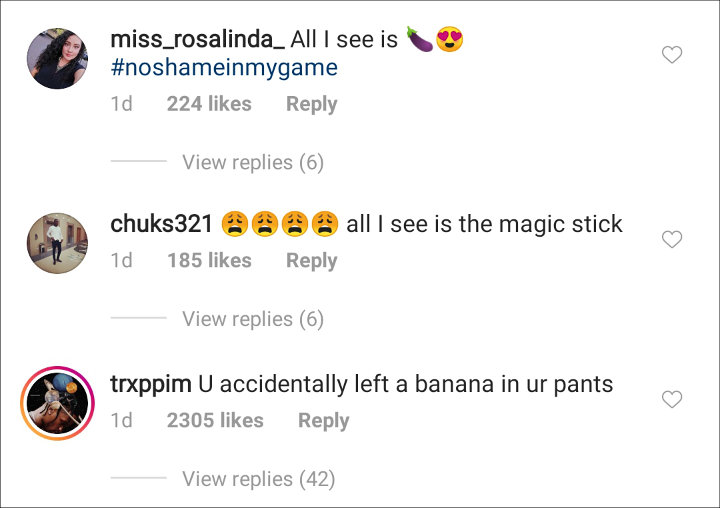 Fans reacted to Jason Derulo’s Wipe It Down challenge video

This was not the first time Derulo made a buzz over his manhood. In November 2019, the singer playing Rum Tum Tugger in “Cats” shared a photo of himself wearing nothing but a tight black shorts. When a fan noticed his bulge and asked, “What animal are you hiding in your pants,” he replied, “Anaconda.”

Derulo’s post has since been deleted by Instagram, prompting him to complain about discriminated against as he argued, “I can’t help my size.” In retaliation, he later posted the same image with a submarine sandwich covering his manhood. “Is this better?” he asked in the caption of the new post.

In regards to the “Wipe It Down” challenge, it came out just days after Derulo shared another TikTok video in which he appeared to have chipped his two front teeth. The mishap took place after he attempted to eat corn on the cob that was attached to the end of an electric drill. In the beginning, he introduced the stunt, “Hey, have y’all seen this (sic)? I’ve always wanted to try it. Life hack!”

At Mount Rushmore rally, Trump denounces ‘merciless campaign to wipe out our history’