As she was leaving Puerto Rico last week, Ylona Acevedo said she saw many families at the airport preparing to go, unsure if they’d ever return.

“It’s very sad, because families are saying goodbye. They need to pick up and move, even though they don’t want to leave the country,” she said. “But they do need to go — the situation isn’t easy.”

Luis Muñoz Marín International Airport is slowly getting back to full service after Hurricane Maria, and Acevedo was lucky to fly out last week.

She came to New York for a family wedding and will head back south in the coming days. But many fellow Puerto Ricans will not make the return journey. 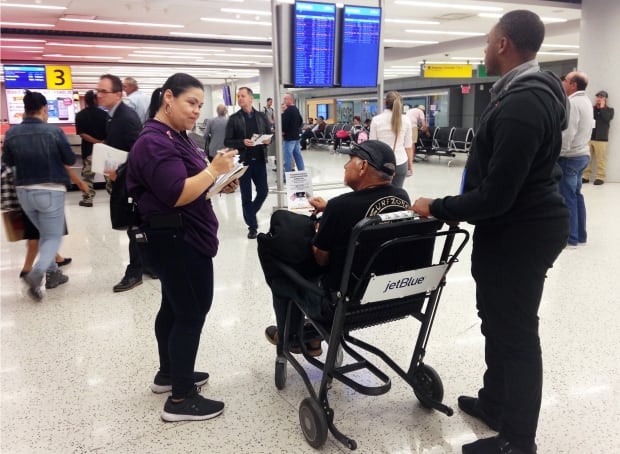 As the slow process of rebuilding continues, many Puerto Ricans are heading to the Big Apple. The city is home to more than 700,000 Puerto Ricans, and officials here estimate tens of thousands from the island could make their way to the city to join family and friends.

This week, New York opened a new service centre to support people displaced by the storms in Puerto Rico, Texas and Florida. City agencies along with non-profit organizations and community groups will help connect people with various services, including public benefits and health insurance, food assistance and counselling for trauma victims.

“This is a full-scale humanitarian crisis. As a city with a significant Puerto Rican and West Indian population, we must anticipate an influx and arrival of these displaced Americans,” said New York Public Advocate Letitia James.

Ana Maria Archila with the Center for Popular Democracy said New York is leading the way when it comes to helping displaced Puerto Ricans, whom she described as climate refugees.

“We tend to think of migration as something that only happens across borders, but the history of the United States has lots of waves of migration,” she said. Because getting out of Puerto Rico is still difficult, she said the full extent of the exodus won’t be known for months. 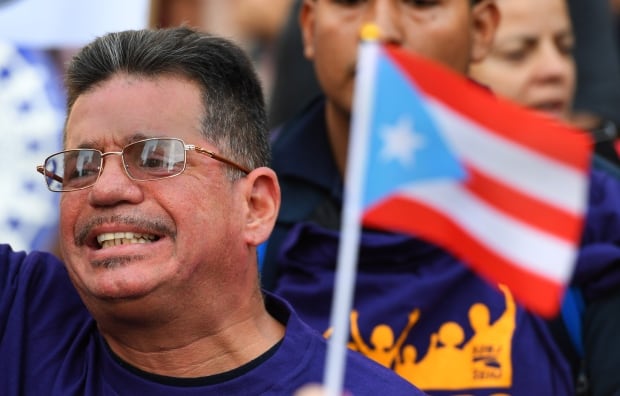 Puerto Ricans in New York whose families were affected by Hurrucane Maria hold a rally in New York on Oct. 4, 2017 to demand aid to Puerto Rico. (Timothy A. Clary/AFP/Getty Images)

It’s also not known how many will leave permanently. Before the hurricane, the territory’s population had declined 8.4 per cent since 2010, as the island struggled through a fiscal crisis and rising unemployment. The governor’s office in Florida estimates that since the hurricane, 20,000 Puerto Ricans have passed through airports in Orlando and Miami.

“The people that are leaving right now are the ones who have more means,” Archila said. “But the people who are going day to day, looking for a place to eat, who have not been able to leave, if they have family in New York, Miami and other cities, they will seek safety.”

The slow pace of rebuilding and recovery in Puerto Rico may be spurring the decision for many to leave. More than 80 per cent of the island is still without power, and a third of the population is without adequate drinking water. As well, half of the territory’s cell towers aren’t working, making communication extremely difficult.

Through his sponsor, Red Bull, and the charity Waves for Water, Colon arranged for and helped distribute 600 water filtration systems in Puerto Rico. He has also raised close to $100,000 US on a GoFundMe page. 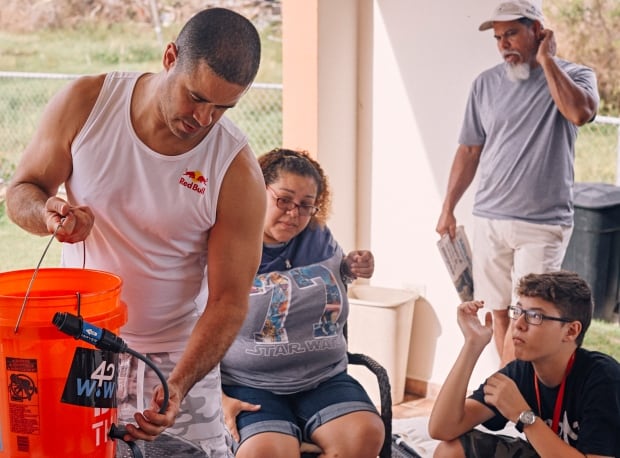 “It’s gonna be a struggle and a long road to success and I’m looking at it like we’re not going to get much help, because we’re not getting much help,” he said.

Colon said locals are frustrated with the federal government’s efforts, as well as comments from President Donald Trump. In a meeting with Puerto Rico’s governor on Thursday, Trump praised the much-maligned relief effort.

“I give ourselves a 10,” the president said when asked to rank the federal government’s response.

Colon disagrees with that assessment, but said he’s trying not to get too worked up about Trump’s comments. “If I focus on him, I’m not going to get anything done, so I operate as if FEMA [Federal Emergency Management Agency] doesn’t exist, nor the U.S. government.”

Ylona Acevedo agrees with Colon and said Puerto Ricans are resilient. “We will rebuild, with or without [Trump],” she said.

For now, she will return to Puerto Rico and help rebuild, but said she can’t predict what will happen in the long term — that is, whether she will make the difficult decision to join the thousands who will leave the island for good.