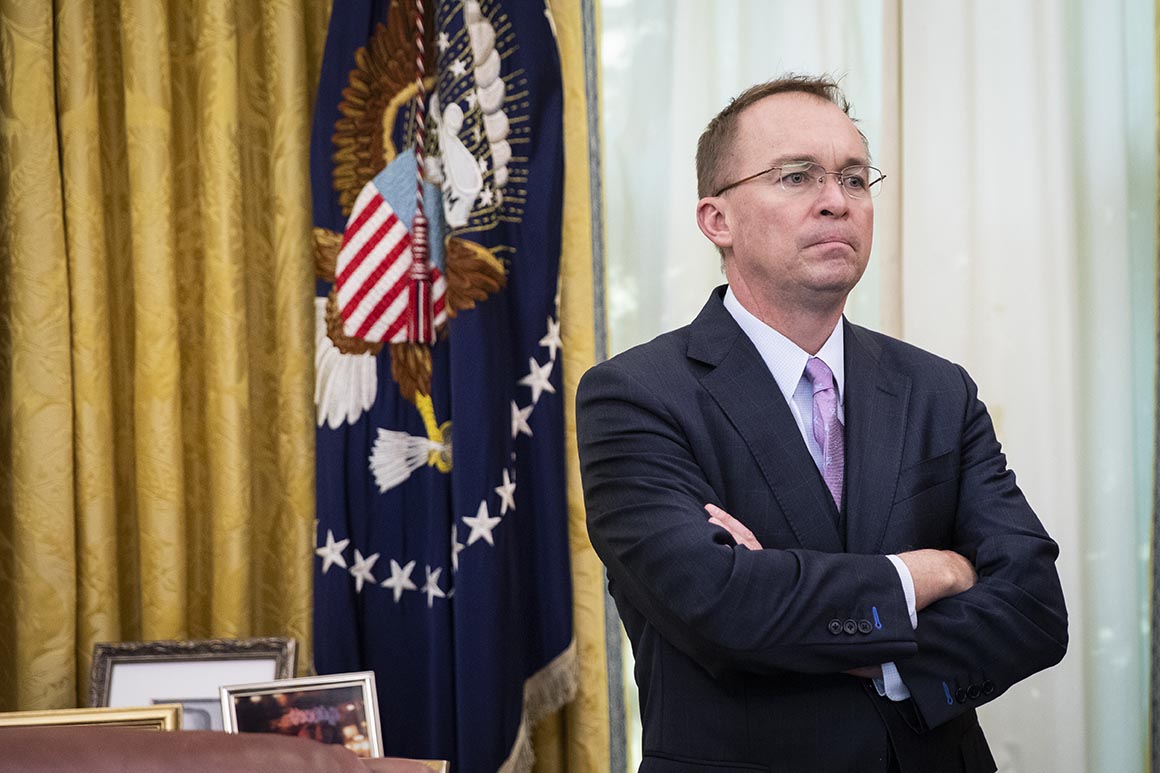 But Mulvaney also conceded to the seriousness of the virus, and said that the U.S. would “probably” see school closures as the illness continues to spread across the globe.

That move was followed a day later by Pence’s decision to appoint a government health official, Ambassador Debbie Birx, as the administration’s coronavirus “coordinator.” But White House efforts thus far have apparently done little to assuage public concerns or calm a tumbling stock market, which opened Friday by falling significantly once again.

The Trump administration has struggled in particular to bring its own messaging – led by Trump’s insistence that coronavirus poses little threat to the U.S. because of preparations he has directed – in line with that of government health officials, who have warned that a domestic outbreak of coronavirus is inevitable.

And while the acting chief of staff sought to downplay the outbreak’s seriousness, White House economic adviser Larry Kudlow suggested that the administration’s response would end up benefitting the president’s 2020 reelction campaign. Voters, he suggested, will be impressed by what he described as the “historic and unprecedented actions” the administration has taken to combat the coronavirus’ spread.

“This is a government-wide effort,” he said, “and so I think that folks are gonna look at that and say: ‘You know what, he’s doing his job very well.’ And therefore I think at the end of the day, it’s gonna actually help him on that.”

The commentary from Trump — who complained in a post to Twitter just after midnight Friday morning that Democrats are blaming him for the coronavirus outbreak — and his aides also comes as the administration has sought to balance warnings from government health and science officials with market-calming rhetoric. White House officials were “livid” on Tuesday with the remarks of Nancy Messonnier, the director of the CDC’s National Center for Immunization and Respiratory Diseases who said that a coronavirus outbreak in the United States was “not a question of if, but rather a question of when.”

That warning from Messonnier drew a sharp contrast with a remark that same day from Kudlow, who told CNBC that “we have contained this, I won’t say airtight but pretty close to airtight.”

Mulvaney’s message on Friday sought to dismiss concern about the coronavirus, suggesting that it is not as serious as previous viral outbreaks. The acting chief of staff told CPAC that coronavirus “is not a death sentence. It’s not the same as the Ebola crisis.”

“At any particular time, 20 million people in this country are going to have the flu. The flu kills people, it does. This is not Ebola, OK? And I’ll tell you what that means in a sense,” Mulvaney said. “It’s not SARS. It’s not MERS. Why do we say that? When you look at the severity of diseases, one of the ways you can look at it is looking at the percentage of people who get it who die. I know that’s sort of hard-hearted, but that’s sort of how we look at it.”

Mulvaney said people are watching the markets, and that there is a “huge panic,” but he questioned why there isn’t the same reaction every year with the flu.

The administration’s convoluted messaging has drawn heated criticism from both sides of the political aisle, and Mulvaney’s comments on Friday only escalated frustrations. Senate Minority Leader Chuck Schumer (D-N.Y.) on Friday afternoon condemned Trump and his team for failing to “quickly and transparently combat the coronavirus.”

“For Mick Mulvaney to suggest that Americans turn off their TVs and bury their heads in the sand when they’re worried about a global health pandemic is Orwellian, counterproductive, dangerous, and would be repeating China’s mistake,” Schumer’s statement said.

The New York senator accused the administration of “hiding the truth,” an action the senator said will only increase the likelihood of the virus spreading.

“This situation demands more transparency from the government, and the American people need to hear the unfiltered truth directly from the scientists and health experts,” the statement said. “President Trump and his team have to stop blaming everyone but themselves, focus less on political rallies and more on solutions to combat the spread of coronavirus.”

Caitlin Oprysko contributed to this report

Previous PostMikael Granlund, Predators extinguish Flames with late game heroics Next PostMilan at a standstill: Life in a city when coronavirus fears take over

Trump recommends face masks to stem COVID-19, though says he won’t wear one

CDC is expected to tell Americans to wear cloth masks, save medical masks for health workers